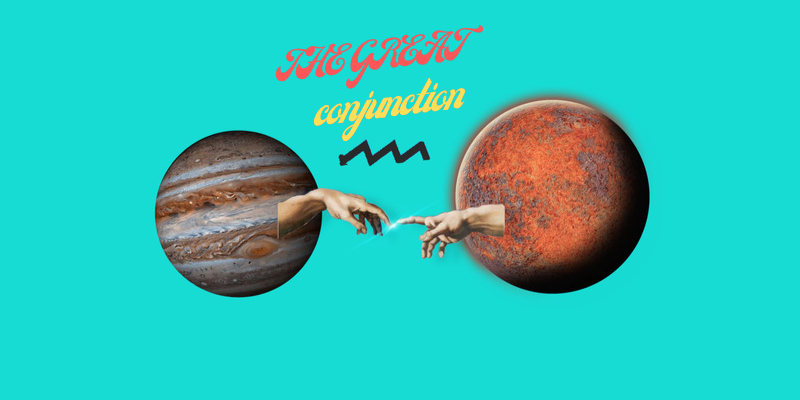 The Great Conjunction of the Now Age: Jupiter and Saturn in Aquarius

So, just what is a Great Conjunction? It’s when Jupiter and Saturn meet in the sky. If you look up in the night sky right now, you can see both planets moving closer together. Astronomers and astrologers alike are watching this mind-bending sight unfold right above our heads. Great Conjunctions only occur once every 19.6 years. But this one is the closest Jupiter and Saturn will have been since 1623!

2020 has handed out some doozies of astral events. We started the year with the Jupiter/Saturn/Pluto conjunction in Capricorn which had not occurred for over 500 years. We’ve had the mother of lunar eclipses in the Moon’s ruling sign of Cancer. Then a rare Mars retro turning up the heat in hot- headed Mars’s ruling sign of Aries. As well as the karma merry-go-round North Node crossing into Gemini. So, what will the Great Conjunction which takes place in Aquarius on Solstice Day, December 21 2020, bring us?

There’s been a lot of talk for years about the ‘Age of Aquarius’. But just when is the dawning of it to refer back to the sixties song? Jupiter and Saturn’s exit from Capricorn and into Aquarius marks a major change. The energy shifts from earth to air. From those at the top – in positions of power, authority and control – to people power instead. The balance is shifted from the few to the many. It’s monumental. Because this Great Conjunction occurs at 0 degrees, it represents a total new order or new beginning. Not at some point in the future. But right now. Which is why this age of Aquarius is the Now Age.

The #1 Astro Hack – In and Out Astrology

One of the easiest ways to predict how a planet is going to behave in a sign is something I like to call ‘In and Out’ astrology. In other words, we usually witness what the transit will bring us just as the planet exits one sign and enters the other. It’s at its most potent. You can use it in your own chart. If we look back to when Pluto was about to enter Capricorn – and incidentally, Pluto is now on its own in there; we had the Global Financial Crisis back in 2008. This told us a lot about the effect Pluto was going to have on our financial structures, banks, investments – which are run of course by those people at the top of that Capricorn mountain.

So, the period around the winter solstice in the Northern Hemisphere and the summer in the Southern is going to show us just what the Now Age will mean for us. It’s a change in the balance of power and means power to the people. It’s freedom, equality and all for one and one for all instead of all for the 1%.

Aquarius is the sign of revolution, innovation and also individuality. It’s about acceptance so expect a fresh focus on equality which will be very good news for the LGBTQIA+ communities and also BLM. Aquarius is open-minded and tolerant. And Saturn is its ancient ruling planet. It behaves very differently in here than it does in its other sign of Capricorn. So, expect new social orders to emerge.

If you are pagan, or a witchy wizarding wise person, then you associate the Solstices with times of magic and new beginnings. With doors opening to new worlds and potentials. So, the fact the Great Conjunction occurs at this exact time hands us the potential for a powerful re-boot on a planetary scale. Work a little magic on solstice day by doing a ritual, meditating, doing a reading with your favourite Tarot deck or setting yourself a fresh goal to manifest in the upcoming year. Aquarius and the 11th house in our charts rules goals, wishes and dreams. And Jupiter in the 11th is all about granting them. Above all, wish for a better world. Not someday – but right now as the new Age of Aquarius begins.

Want something more for the Now Age? You got it! Check out your Now Age forecast for your sign.